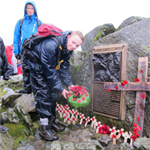 The District was well represented at all 3 local Remembrance Day Parades and Services – in Bramhall, Woodford, and Hazel Grove. Bugler Nick Sykes from 1st Hazel Grove marked the traditional Last Post and Reveille after which wreaths were laid by representatives from all Groups taking part. The Ladybrook Valley wreath was laid on behalf of the District by Deputy District Commissioner Andrew Corrie at the Hazel Grove War Memorial.

At the same time Robinah Shah, the District Commissioner, who is also a Deputy Lieutenant for Great Manchester was laying the wreath on behalf of the Lord Lieutenant at the Stockport Civic Parade on the steps of Stockport Art Gallery.

After the Hazel Grove service Brian Dooley, GSL 3rd Hazel Grove was approached by a lady visiting the area from Scotland who had attended the parade. It turned out that she was a scout leader back home and she wanted to congratulate us on the fantastic turnout of young people for today’s service and on their immaculate behaviour.

Meanwhile at the same time a Group of Explorers from XBU Explorer Unit wanted to commemorate Remembrance Day in an extra special way and they went up to the Lake District for the weekend and on the Sunday climbed Great Gable and laid a wreath at the summit – in the presence of a large crowd of other fellwalkers and climbers.